Hahn, and his modern art, were featured in a full spread article in the March 2018 issue of St. Louis Homes + Lifestyles magazine. He was interviewed and they came to his studio for a photoshoot late in 2017. 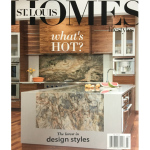 Hahn’s newest work has both a funny and somewhat uncomfortable edge. As he explains, “It explores the dichotomy between what we express externally versus what we hold internally.” He continues, “I’m manifesting this mainly through words that are obvious and visible combined with partially obscured words in the textured surface. It’s a study on human nature and our need for validation and the perceived perfection in our lives, in conflict with our innate inability to be vulnerable and transparent, resulting in a clear contradiction between the two.”

Boy, 2017 and January flew by! I am way behind publishing this article. After getting past some really challenging times, I feel like so many great things have happened in my personal and professional life in 2017. I am really excited for what 2018 has in store for me. These are my the top 5 art accomplishments of 2017 that I am most grateful and excited about!

I met an interior designer when I was exhibiting at the Webster Arts Fair this summer. She loved one of my large red paintings for a contemporary hotel project she was working on in Davenport, Iowa. The hotel loved it too, and now my modern abstract painting is part of a beautiful art-themed hotel experience. 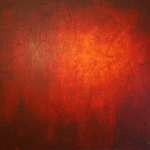 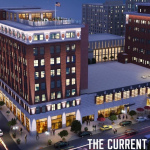 This fall, another one of my large red paintings was purchased for the Dierbergs corporate offices in Chesterfield Missouri.

It isn’t as common to sell multiple pieces to the same collector at the same time, especially large paintings. But a couple in Seattle found my art and fell in love with several paintings for their home. I crated them up and sent them on their long journey to the northwest.

5) Commissioned painting for a couple in Philadelphia

I love doing commissioned art! It is really gratifying to work with people who want my art in their homes or businesses to enjoy. It is a great opportunity to get to know them and it makes the situation a lot more personal and gratifying. A couple in Philadelphia commissioned me to do a large painting in their dining room. They had just gotten married and moved into a new house that they are making into their joint home. Was a great experience to be a part of their new life together.

Hahn used strong vertical and horizontal lines in this piece. It suggests an architectural subject. He combine that with some distinct texture that gave it some additional industrial cues. The dark burgundy color palette is bold and attention getting, which was intentional, as he wanted a strong visually impactful piece.

We all experience corruption in different facets of life. It is often portrayed on the evening news and in social media. You can’t miss hearing about it or at least the speculation of it. In this painting, Hahn is showing the destructive remnants of a corrupt society. The architectural elements seem to have decayed in this abstract painting.

Purchase this painting and browse others on his Etsy store.

If you know my artwork at all, you know I love abstract art and specifically from the modern era.

But no one can deny the magnificence of the great pieces like Leonardo da Vinci’s Mona Lisa. It is easily one of the most famous paintings in the world.

But did you know that dear Mona had a twin? Covered with multiple layers of dark and cracked varnish she hung abandoned in cavernous museum basements for ages – exactly from 1819 when Prado Museum in Madrid was founded on the base of Spanish royalty’s art collection. You can read more about this on the DailyArtDaily, but here are the highlights. 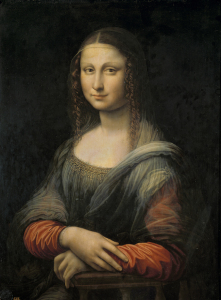 The Museum assumed it was a bad 16th- or 17th-century copy of Leonardo da Vinci’s original, which dates back to the early 1500s. Everything changed when Prado’s curators decided the painting needed a face lift because it was going on loan to the Louvre. Some X-ray and infrared studies has been executed, and everyone were shocked to find a beautiful landscape hidden beneath the dark paint behind the subject.

What they uncovered was Mona Lisa’s twin. As you can see, after restoring the dark background back to it’s original state, it is almost identical to the famous Mona Lisa. 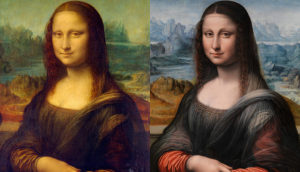 Even more shocking is that according to the curators the painting was actually executed by an artist in Leonardo da Vinci’s workshop at the same time as the original. Probably it was created by Francesco Melzi, one of Leonardo’s favorite pupils.

Now being one of the most famous paintings in the world, it is also vulnerable to unfortunate amateur and juvenile misrepresentations such as these: 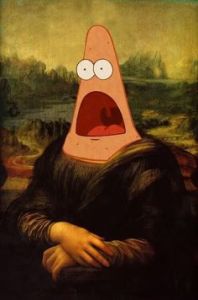 People should really find better things to do with their time.

I recently made a trip to the big apple…speaking of Apple, I couldn’t miss their advertisement when capturing the Empire State Building from my hotel room. Good ad placement! 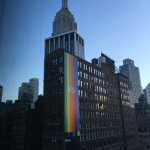 I got a chance to see a few sites including Times Square and Central Park. It was cold and some snow left from a prior storm, but the city truly is amazing. 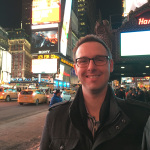 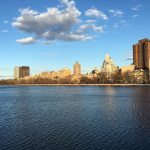 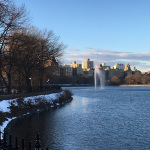 One of my favorite parts of New York are all the great galleries and museums. I spent some time in the Metropolitan Museum of Art and saw some amazing art. Here are a few that I photographed. 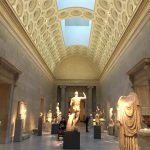 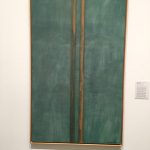 In 1948, Barnett Newman began painting in a new and unique format. Abandoning the use of various other abstract elements on the canvas, Newman instead laid down one or more vertical bands usually with the help of masking tape. As you can see here, the tape was never removed. Makes you wonder, was it intentional or just because it wouldn’t remove cleanly like the newer blue painters tape that is loved by present day artists and home owners alike. Anyway, these “zips,” as he came to call them, became the organizing principle behind the work, the decisive elements that structure the entire picture.

Concord was painted during Newman’s most prolific year. It was shown at the artist’s first solo exhibition, at Betty Parsons Gallery in 1950, which was installed with the help of his friend, you may know of him… Mark Rothko (one of my personal favorites). The picture’s green layer of paint is uncharacteristically brushy, and it was perhaps with its atmospheric wash in mind that Newman titled the painting after the town famous for Henry David Thoreau’s Walden, where he and his wife, Annalee, had honeymooned fourteen years earlier. 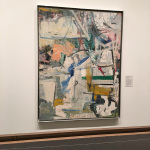 Named for the day on which it was completed in 1956, this is the largest of ten grandly scaled paintings de Kooning exhibited at Sidney Janis Gallery that spring. In his review of the exhibition in Artnews, the critic Thomas Hess likened the works to “abstract urban landscapes”; indeed, in its highly textured surface, swooping lines of paint, and glimpses of newspaper transfers, Easter Monday seems to reference the whirling pace and gritty detritus of the modern city. The transferred newsprint, particularly visible at the bottom and top right, remains aligned with the edges of the canvas, enforcing the tenuous grid structure of the painting. Shot through with Rubensian fleshlike pinks and vivid blues and yellow, Easter Monday is a tour de force of de Kooning’s 1950s style.

I have new fine art prints of some of my most popular pieces on sale on Etsy now. They start at $30 each and are in several sizes. For a limited time you can get 50% off all my prints on Etsy by using coupon code: 2015PRINTSONLY50OFF

Here are some of the prints you can choose from: 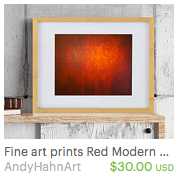 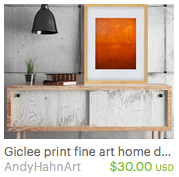 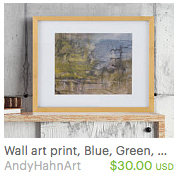 As a followup to my previous post, New custom painting for couple I met at Webster Art&Air, I wanted to show you how the final painting turned out. As you may remember, I met this couple when I exhibited at Webster Art & Air.

I recently completed and installed this custom painting. Here are a few pics of the final piece installed. 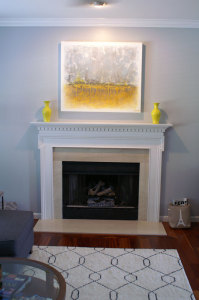 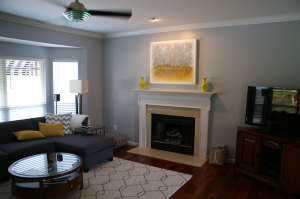 I have been getting my art ready for the Webster Art&Air show June 5-7. Here are some sneak peaks at some of my new art. My mini panel paintings were very popular at my last show, so here are some photos showing my progress with them. 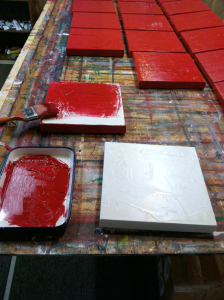 Here you can see me applying one of the first layers of red paint over the texture I had originally applied. 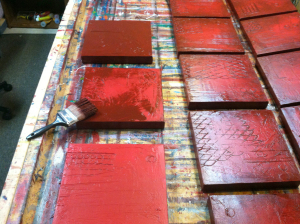 As I apply each layer, the depth of color and texture really starts to come out. 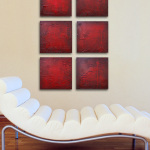 And here is what they look like when hung in your home or office.

What do you think of the finished product? I will be selling these at Webster Art&Air for $95 each, they are nice to combine and mix and match in any configuration on your wall. You can also buy some now in my Etsy store.

How would you display them? Vertically, horizontally, in a bundle of 4 or 6? 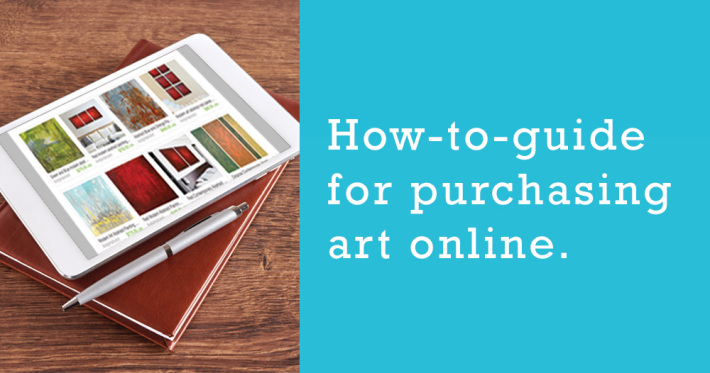 Buying art online can be a very positive experience. Art can enrich your life and improve your feeling of self-worth. It is great for inspiring children and young adults.

Buying art online has some great advantages too, like increasing the volume of art to choose from as well as finding some really affordable options since you can often buy directly from an artist. Buyers just have to keep a few things in mind to make sure they get something they will really love when the package arrives.

When you buy art online, make sure the artist or website has good photos of the art. There should be at least a photo showing the whole piece as well as a detail or alternate shot so that you can see as much of the details of the piece as possible. Ideally, there would also be a photo of it in a room or setting to show scale along with photos of the sides or edges or anything else that is unique or important for the buyer to see. Seeing art in person is always best, but good photography has really bridged the gap for online purchasing of art…

Due to popular demand, I have added multi panel paintings to my Etsy store. Now you can mix and match pieces to make any combination or arrangement you want. These were so popular last fall when I exhibited at the Shaw Art Fair, that I sold out of them. 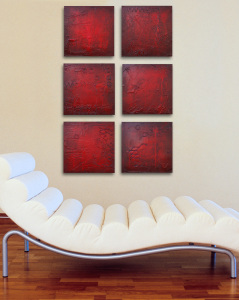 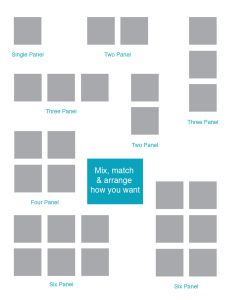 Starting at just $95 for a single panel, these are a great value. Plus the versatility of them really make them a great find. Hang this art vertically or horizontally or in pairings of four or six to fit any space.

I am thinking about adding additional colors and styles, so let me know what else you would like to see! 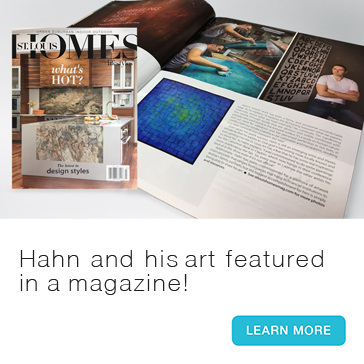 Shop my art on Etsy

For the latest news about my art, exhibits and special promotions, join my email list today!

Lets be social together

A little about me

I am a contemporary abstract artist. My art is an expression of my experiences, emotions, inspirations and stories I choose to tell.